The Belgium embassy in Kenya has yesterday announced the statement on their twitter.

“The Embassy is happy to announce that from today on Belgium recognizes the diplomatic and service passports issued by Somalia.” 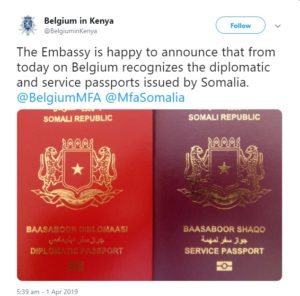 The decision to recognize Somali passports does not influence on the visa requirements to Norway, which are strict. Non-EU/EEA citizens must apply for a visitor’s visa.