Thank you for this opportunity to brief the Council. I am glad to be
doing so with my friend and colleague, Ambassador Maman Sidikou.
Yesterday we briefed the AU Peace and Security Council together, which
is why we are joining you from Addis. The AU-UN partnership in Somalia
is unique, strong and essential for success.

MADAM PRESIDENT,
Let me begin by thanking the Council for its continued support to UNSOM
and the peace and state-building process in Somalia.

When I spoke to you in February I was both excited and worried about the
year ahead. The last few months have highlighted the progress and the
challenges.

I was excited because, after too long a pause, there was the prospect of
political progress again. And indeed, momentum has been regained.
Somalia’s third Government in less than three years is hard at work
and the Federal Parliament has begun its 2015 session. Somalia’s
federal, regional and local leaders, parliamentarians, and people from
all walks of life are building a federal state, step by step, through
dialogue and reconciliation. The prevailing environment of mistrust
accumulated over 25 years makes the task difficult and painstaking; but
it must continue, and deserves our sustained support.

Federal President Hassan Sheikh Mohamoud, as well as the Prime Minister,
Speaker and the leaders of Puntland, Jubba and South West
Administrations have reiterated their determination to deliver
Somalia’s Vision 2016 plan, without any extension of the term of the
Federal Parliament or President in August and September 2016
respectively.

There are several important targets the Government has set for the
coming months, including: completing the formation of Interim Regional
Administrations and assemblies; advancing the constitutional review;
establishing the National Independent Electoral Commission and
Boundaries and Federation Commission; and finalizing priority
legislation on political parties, citizenship, and elections.

Once parliament has approved the nomination of Commissioners for the
National Independent Electoral Commission, the NIEC faces a compressed
timeline to discharge its duties. Upon its establishment, the commission
will need to decide swiftly on how to implement its mandate. The United
Nations will deploy an Electoral Assessment Mission to advise and
determine, in close collaboration with stakeholders, the nature and
extent of UN electoral support in Somalia.

The UN, together with the African Union, IGAD, and the European Union
and member states continue to support the formation of the Interim
Regional Administrations. Many challenges remain – in particular
ensuring inclusivity. More needs to be achieved in terms of local
reconciliation. Women, minorities and youth must be well represented as
part of that inclusivity.

I am also concerned about the timetable for elections in
“Somaliland”, which were due next month. The recent decision by the
House of Elders to postpone elections for 22 months until March 2017 is
a disappointment. The UN has joined other international partners in
urging a reconciliation of this timetable based on a political consensus
among all “Somaliland” stakeholders.

The security of UN staff in Somalia remains a priority. Tragically a
terrorist attack in Garowe on 20 April claimed the lives of four UNICEF
staff and three Somali guards. Al-Shabaab targeted individuals who were
working hard to improve the lives of Somali children and families. It
was, as the President Hassan Sheikh Mohamoud said “an attack against
the future of [the] country.”

We honor our fallen colleagues by continuing their work. We have to
ensure a balance between our duty of care to staff and the delivery of
our mandate to support the Somalis. Overall, the UN – Agencies, Funds
and Programmes and mission combined – have on average 1,400 people
deployed through Somalia. We must ensure adequate protection for these
teams.

In this regard, I want to thank the Council for its support to the
expansion of the United Nations Guard Unit, which provides vital
protection to UN staff within the Mogadishu International Airport
compound and the new offices we have moved into in Mogadishu city. This
is the first time a Security Council mandated mission has operated from
outside the airport zone since 1995.

I remain concerned about security in Somalia, and about the threat posed
by Al-Shabaab to the wider sub-region, demonstrated by the heinous
attack on Kenya’s Garissa University in April. We need to monitor
closely and be able to respond to any sign that Al Shabaab is
benefitting from their links to extremist groups in Yemen.
Counter-terrorism requires effort on many fronts: I hope that the coming
weeks will see even closer cooperation among Member States to address
this threat at a sub-regional level, including measures to prevent and
counter violent extremism. With so much at stake between now and 2016,
we can expect Al-Shabaab to do everything it can to derail the political
process.

Renewing the joint Somali and African Union offensive against Al Shabaab
is an urgent priority. I once again pay tribute to the courage of the
Somali National Army and our AMISOM colleagues. The AU and UN recently
completed a joint mission to Somalia to assess the benchmarks for a UN
peacekeeping mission; the impact of the ‘surge’ of AMISOM troops,
and to provide recommendations on the next steps in the military
campaign. My colleague Ambassador Sidikou and his Excellency the Prime
Minister of Somalia will brief further on this.

Development of the SNA and Somali police, is an imperative for both the
defeat of Al Shabaab and AMISOM’s exit strategy. The Guulwade (or
“Victory”) Plan referred to in the Secretary-General’s report
seeks to train and equip the SNA for joint operations now. It provides a
sound framework; but business as usual will not be enough to support it.
A robust architecture for the delivery of international support to the
SNA is needed and we are consulting all partners on the options. A
similar plan for the police, including regional police, is also needed.

I am encouraged that the mechanisms created in 2014 to support the
implementation of the New Deal Somali Compact are starting to perform.
The government has exercised leadership in bringing all partners
together. A portfolio of 7 programmes, aligned with Federal Government
priorities and donor resources, and with a value of over $100m, has been
approved for inclusion in the UN Multi-Partner Trust Fund. I thank all
donors who have pledged support, and further encourage them to support
Somalia’s recovery through these mechanisms.

However the alignment and coordination of international assistance
behind Somali leadership is uneven. Of the funds generously pledged at
Brussels in 2013, only ten per cent have been committed through the
Compact architecture. I encourage all Somalia’s partners to adhere to
our collective commitments, and especially to increase their use of
national systems.

Although Somalia’s financial system remains high-risk, the Federal
Government and its international partners are taking steps, within the
New Deal framework, to ensure robust oversight of the overall governance
architecture. There is still a long way to go, but I am pleased to
report that a Treasury Single Account is now in place, creating a single
channel for national revenues and payments.

There is work to do on human rights as well. This year, Somalia will
need to report on progress made on their commitments in the Universal
Periodic Review. I note with concern that there has been a marked
increase in executions and death sentences handed out in 2015 despite
Somalia’s commitment to put a moratorium on executions.

I also remain concerned about threats and intimidation of journalists in
Somalia.

I welcome the AU’s report on allegations of sexual exploitation and
abuse by AMISOM soldiers and commend the work of the investigations
team. As the Council has already noted, there is now a need to follow
up. Ambassador Sidikou will brief further on this.

The humanitarian situation in Somalia remains alarming. 730,000 Somalis
continue to be unable to meet their most basic daily food needs. An
additional 2.3 million people are at risk of sliding into the same
situation. Among them over 1.1 million Somalis remain displaced, the
majority women and children. This situation requires constant attention,
adequate funding as well as continuous upgrades to our analytical and
forecasting capabilities and systems. One third into the year, the
Humanitarian Appeal is only 12 per cent funded, having received only
US$100 million of the $863 million needed.

The situation could be further compounded by a poor rainy season, the
closure of the Somali remittance operators and an escalating conflict in
Yemen. As of 14 May Somalia has received 6,949 arrivals since 27 March.
The vast majority – around 92% – are Somali nationals of whom many
have refugee status in Yemen.The UN is actively supporting efforts to
assist those returning.

The planned High Level Partnership Forum on 29 July will be an
opportunity for Somalia and its partners to come together to agree on
priority actions between now and 2016. But continued progress between
now and then will take sustained attention and commitment on all sides.

I believe that UNSOM’s mandate remains relevant for the coming year.
As the federalism process moves forward, we will adjust the focus of our
efforts. Our work in Somalia’s regions will become ever more critical,
and we will seek to maximize our support to existing and new
administrations, within our mandate of providing good offices and
strategic policy advice.

This requires logistical and security support in difficult
circumstances. I look forward to a strategic review of UNSOA also
scheduled for July. It will help us to establish what is feasible,
including to support emerging administrations where UNSOM does not have
a presence. We will continue to update the Council on the adequacy of
security arrangements. Finally, we will keep under review the
preparations for an electoral process in September 2016, and provide
further advice on the implications as required.

While it is too soon to celebrate definitive success in Somalia, I
believe we would be missing a strategic opportunity if we fail to
appreciate just how much Somalis and the international community are
achieving. As we cast our eye over the wider region where else do we see
a country, once mired in conflict, that now has progressively better
functioning governance and, where political dialogue is replacing the
rule of the gun and where , most importantly, violent extremism is being
successfully countered. A country from where once refugees fled in their
millions and which is now receiving refugees from other countries, such
as Yemen, and is welcoming home its own citizens.

It is an honour for me to work in such a context and with such dedicated
partners and brave UN colleagues. The world should not squander this
opportunity. We need to reinforce success with increased engagement and
resources in the coming months.

I am grateful for the Council’s continued support. 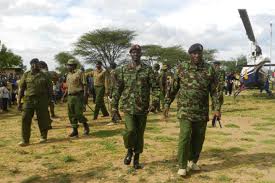 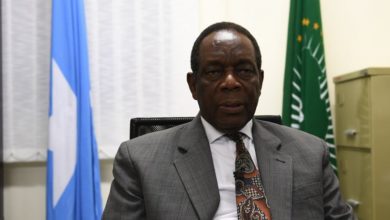