A Somali woman walks past a destroyed building after a suicide car bomb attack on the Ministry of Labour building in the capital Mogadishu, Somalia on March 23, 2019. | Photo Credit: AP 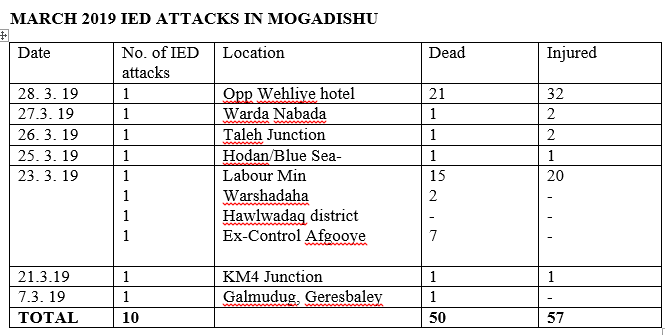 As the city took a deep breath from another deadly month of February which concluded with a massive bomb attack at Maka al Mukarama Street which claimed at least 25 lives and injured 131 people, another fatal wave of bomb attacks was in the offing robbing the city of dozens of lives.

Ten bomb attacks rocked Mogadishu in the month of March killing at least 50 people and injuring 57 others as the militant group Al-Shabaab made inroads into some of the most fortified areas of the city.

Amid a brief withdrawal by Somali army troops from their bases in Middle Shabelle over delayed salaries, Al-Shabaab trained its resources on the city deploying vehicle born improvised devices (VBIEDs) in the heart of the city killing among others a government minister.

The increased attacks affirm a recent report by the Mogadishu based security research centre, Hiraal Institute which warned of increased attacks in the city following sustained hellfire bombardments of Al-Shabaab by U.S forces in the regions. “The group (Al-Shabaab) seems to be completing a transition to focus more on urban guerrilla operations in order to render the increased air attacks less effective in weakening its ability to hurt the government and its allies,” the report notes.

The air attacks, the report said have made it difficult for Al-Shabaab to use its heavy cannons and move troops around, giving regional forces an opportunity they did not have in the past.

Al-Shabaab has rarely conducted multiple attacks in the city in a day but the March 23 offensive seemed a change of script. Four attacks happened in the city within a span of three hours leaving in its wake 24 people dead.

As security forces battled the militants at the Labour Ministry in Abdi Aziz district, an IED went off in Ex-Control-Afgooye area in the outskirts of the city killing seven people. Another IED hit the industrial area (Warshadaha) in Hodan district killing two within the same timeframe. The fourth IED attack was also reported at Howlwadaq district in Mogadishu but there were no casualties.

AS attacks in Mogadishu ‘to rise’ amid allied offensives-report

Three IED attacks rocked the city between March 25 and 27 killing three people and injuring five while two attacks on March 7 and March 21 at Galmudug area (outskirts of Mogadishu) and KM4 junction killed two people and injured one.

The group dug in for more blood closing the month of March in yet another deadly car bomb attack opposite Wehliye Hotel, off Maka al Mukarama Street. In the March 28 attack, Al-Shabaab parked a vehicle loaded with explosives outside a busy restaurant killing several 21 people some of whom were either in the restaurant of shops around. Another 32 people were injured.

The IED attacks involving personal cars all had a similar trend-the vehicles were immediately engulfed in fire when the bombs went off. The trend seems to differ from previous attacks, some of which left vehicles uninflamed giving occupants a window of survival or escape. It is not clear yet if the recent IEDs are fitted with highly flammable contents.

Amid the deadly attacks, President Mohamed Farmaajo took to task Somali army commanders accusing them of failing to annihilate the militants in line with his pre-election agenda. Addressing AMISOM senior officials a week after his election February 17, 2017, Farmaajo said he would rid Somalia of Al-Shabaab in two years.

However in a meeting with Somali National Army commanders last week at General Gordon military academy in Mogadishu, the President wondered why the army had not fulfilled his promise to the people.