The sequences on the ways disagreements unfolded between former Mayor of Mogadishu Thabit Abdi Mohamed and the administration of Prime Minisetr Hassan Ali Khaier occurred merely 90 days after the appointment of Thabit as the Mayor of the Somali capital.

Thabit, a former staff of the Somali Embassy in the United States and a one time Deputy Director in Villa Somalia – the presidential house, was appointed by the President of Somalia Mohamed Abdullahi Farmaajo on the 6th April 2017 for the post of Mogadishu Mayor.

In the first 3 months of his tenure, the relationship between Thabit and the Prime Minister of Somalia Hassan Ali Khaire was perfect. He was always taking part in the weekly Thursday’s conference of the Cabinet of Ministers while PM Khaire continued to visit regularly the center of the Banadir City Council offices organizing together parties till the two fell apart like the two repelling sides of a magnet.

In the meantime, before we cover deeply on their disputes, let us first shed some light on the achievements undertaken by Mayor Thabit on the 9 months he held the reins at the mayoral seat.

He initiated sound financial policies in the state like the financial expenditure of Banadir State where he changed cash salary payment into account deposit method for every staff which prompted the financial donors to have full confidence with his office.

The World Bank, for example, has invested over a six-month period to fund around 1,000 youths for job creation in Banaadir State. He was also involved in other projects among them renovations of schools and other regions sponsored by different organizations.

The length he was in office, 4 major roads were built: 30th Road, Karaan, Generals Kahiye and Daud Roads. He also devolved the administration where departmental directors and city district commissioners were performing well and instituted regular monthly salary for the council workers.

Disputes between Thabit and the federal government: Mayor Thabit Abdi was not a resting man but a workaholic person and his sacking can make people to come up with different ideas from the perspective of the dispute that came between him and the Prime Minister Khaire regarding the port tax, Mogadishu’s federal stance, Banadir security, his political ambitions, his relationship with opposition figures or even land matters but the reality is, he was not a lame duck.

Levels of disputes: Port Tax: Thabit desired financial and administrative independence of Banadir state where he earlier requested the Cabinet Ministers an increase for his region on the financial quota his state receives from the port tax from 15% to 25% which led to an endless tug of war.

“The decision on the federal stance of Mogadishu and coming up with its special laws is upon the honourable shoulders of the Peoples House I am standing today before them. We leave no stone unturned to make wide consultation on the matter. Mogadishu residents are patient people that adore governance who pay taxes hence their request on extending a supporting hand to them to erect their constitutional federal stand permitted for the Somali capital” he said.

Banadir Security: In reference to Article 2 of 1963 which stipulates that the security department of the state security to be under Banadir administration, Thabit’s administration office requested several times to bring the matter under his office where he displayed a program called “Eye of the Neighbourhood” in whiche the state police and intelligence officers will be able to get information from the exhausted city residents starting from house, ward up to the district levels but the plan was rejected.

Political ambitions: Mayor Thabit spent many hours to be on the spotlight as a productive individual who is able to fill any of the top 2 positions in the country where he developed conducive relationship with the tribes residing in Mogadishu and creating a strong bond with the city elders and politicians.

Opposition inclination: Following the fatal incident attack in late December 2017 on the house of Abdirahman Abdishakur, a former presidential candidate and an opposition figure and his subsequent arrest, Thabit was an active persona on getting back his freedom when he was imprisoned by the federal government depicting his dissatisfaction of the attack.

December 30th, 2017: When the house of Senator Abdi Qaybdid was attacked in Mogadishu, Thabit paid him a visit harshly criticizing the attack which he termed to be unconstitutional.

“We feel deeply sorry over the terrorizing attack carried on the family and home of Senator Abdi Hussein Awale (Abdi Qaydid), the chairperson of the Constitution of the 2 assemblies. It is illegal to attack the house of a citizen and terrorizing his family leave alone a senator’s one who has full immunity. The perpetrators and those who ordered the attack must be immediately brought before the Law to face justice” said Thabit.

While Thabit had developed good understanding with the opposition figures, president Farmaajo left for central Somalia for an official tour and Thabit travelled to the region and took part in the final reconciliation process between Galmudug state and Ahlllu Sunnah wal Jama’ah in Dhsuamareeb town, Galgaduud region.

However, two nights ago at midnight, Thabit Abdi Abdi invited the Press with the intention of resigning from his position but he was stopped from this move by elders who took a crisis meeting with him and made him to change his mind.

Last night a general meeting was held in Banadir Mayor’s block which deliberated the status and future of Banadir State attended by members from 3.5 tribal quota living in Mogadishu districts and different sectors of the public and unanimously appointed Thabit for another 2 years coming.

In the same juncture, it was jointly agreed that during this duration they will be engage in endevouring to secure the federal future stance of Mogadishu city, facilitating the unity of the public and upgrading the general public services but at daybreak these plans never saw the first daylight of the 24 months target set by the meeting where the mayor was sacked before 8am this morning by the federal government replacing him with federal Information Minister and Culture Abdirahman Omar Osman.

It unclear to predict what lies ahead in the near future but what is clear is that Thabit’s role in the nascent administration has come to an end but his response is what will set the pace in the coming days but time will tell everything. 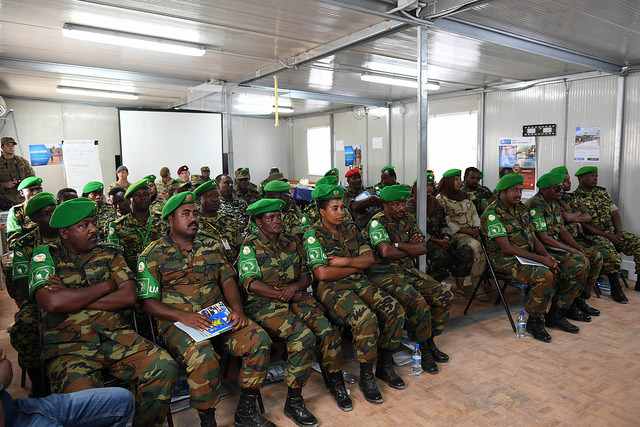 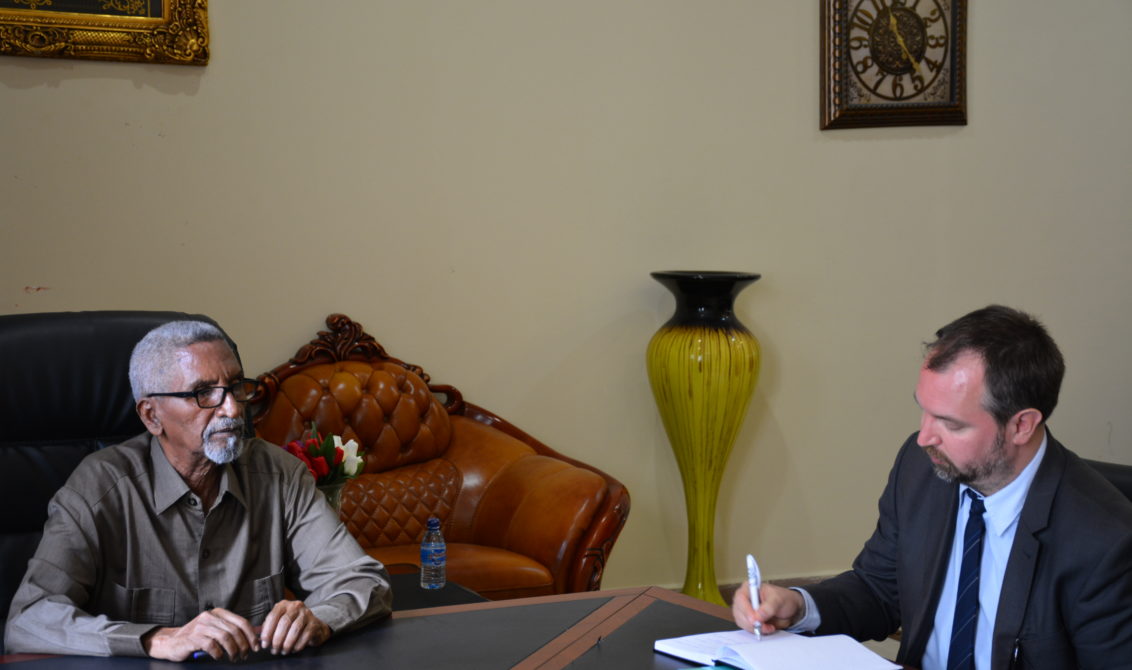 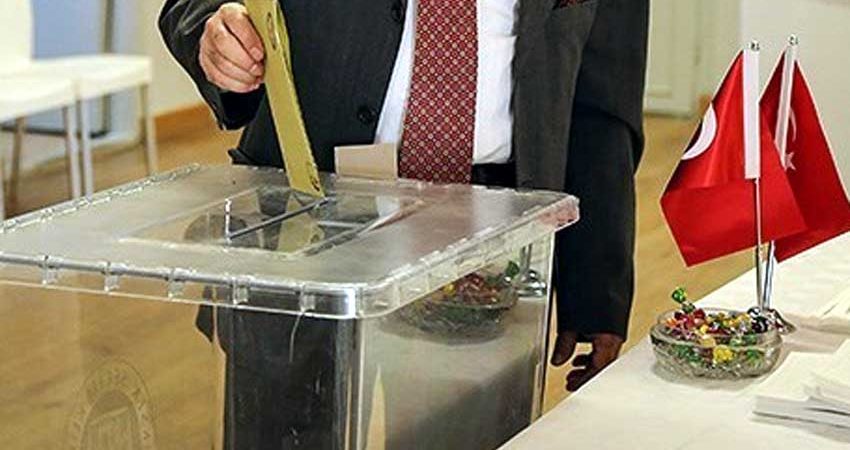 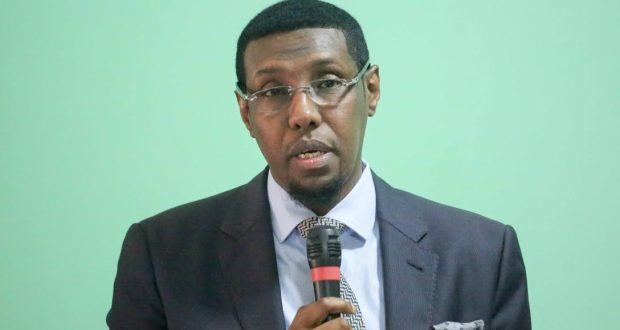