The United States has released the first video of the strike that killed the leader of the Islamic State in northern Syria.

A grey background video shows the troops firing at the militants at the site where Abu Bakr al-Baghdadi was hiding before entering the area. Baghdadi escaped to a basement where he killed himself after detonating a bomb full of explosives.

Chief of the United States Army, General Kenneth McKenzie, said the demolished buildings looked like “a parking lot with huge holes”.in the incident, two children had died with Baghdadi and the number of children was not three, according to previous reports.

President Donald Trump described Baghdadi’s death by saying he was making noise and crying during the last few seconds of his life.

“He moved into the cave with two children and blew himself up while his people were in the courtyard. You can know his actions from who he was,” he said at a press conference. 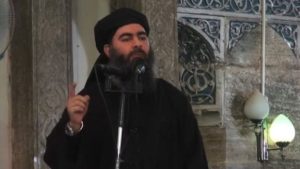 General McKenzie said four women wearing belts full of explosives and one man was killed in the building operation. He also said an unknown number of fighters have been killed after being shot down by US helicopters.

He added: “I want to make clear, although there were very high pressure and high levels of the operation of the effort extended to protect civilians damaged and children who were expected that they are inside the building.

General McKenzie confirmed that the leader of the group that formed the Islamic State was identified in the DNA sequence, adding that copies of his documents have been retained since Baghdad’s detention in Iraq 2004.

The remains of Baghdad body were flown to the base to probe his identity and then buried in the sea 24 hours after his death “following to the rules of armed conflict”.

Migrants found in a truck

Are vertical gardens the future of farming in Africa?

Saudi hit squad that killed Khashoggi was trained in US: report