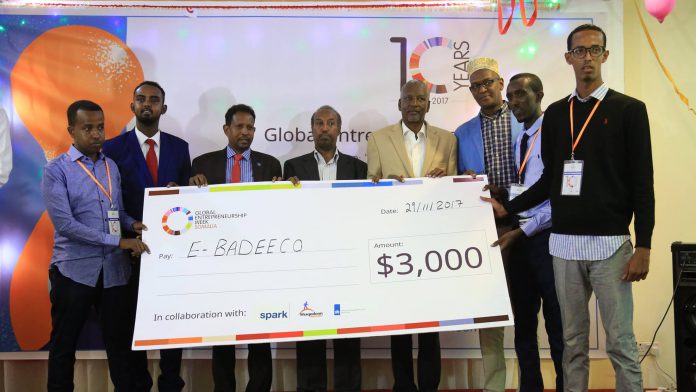 Competition on technology innovation was wrapped up today in Mogadishu which was organized by Shqadoon company, a locally owned nonprofit organization.

The contest was applied by nine universities but only 4 of them made to the final stage to display their skills in the technological know-how feat.

Speaking to Goobjoog Business, the head of the programs Ahmed Ali described the event vividly.

“Initially 9 different universities applied to take part in the program but only 4 made to the final presentation and they were was given a 5 day training seminar” said Ahmed Ali. The

Describing further the different talents depicted by the participants, Ali touched on their exhibition terming it as admirable efforts.

“The first group competed on a platform known as E-Coodey (Vote for Me) which was an SMS voting system which was an excellent program. Second party displayed a program called E-Badeeco (E-Products) targeting the Somali traders to do accounting job in Somali language while the third patch depicted an application used to unlock doors using one’s mobile phone and the fourth one illustrated a program called Zakeeye” added Ali.

In the long, an independent panel assessed the presentations by the nascent Somali first degree graduates who hailed from the universities of Mogadishu, Jamhuriya University of Science and Technology, SIMAD and Hormuud.

SIMAD University came out the top winner and received a cheque worth US$ 3,000 meant to enhance their application.

In a new twist, US declares Bariire casualties were terrorists