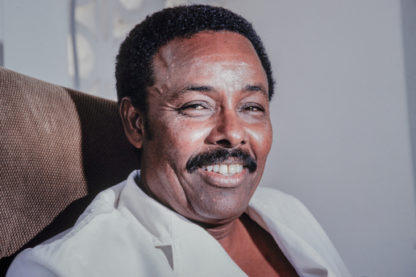 GOOBJOOG NEWS|MOGADISHU: Ali Mahdi Muhammad who died in Nairobi Wednesday of COVID19 ruled through Somalia’s most turbulent times and was largely seen as the President of ‘northern Mogadishu’.

His ally turned fiercest enemy General Mohamed Farah Aidid made Mahdi’s rule almost impracticable holding sway of southern Mogadishu.
The deceased leader was elected President by his United Somali Congress (USC) faction on January 29, 1991 barely two days after the ouster of President Mohamed Siad Barre.
Having been a successful businessman before plunging into politics, Mahdi bankrolled USC activities and to a large extend used his finances to frustrate Aidid’s Somali National Alliance.
Two conferences in Djibouti between June and July of 1991 endorsed Mahdi as President. The conferences were attended by allied factions namely SSDF, SDM and SNM. The latter, based in Somaliland rejected Mahdi’s endorsement and so did Aidid who did not attend the talks.
Subsequently, Mahdi was sworn into office in August 18, 1991 for two years term.
The differences between Mahdi and Aidid culminated into the four months ‘Battle of Mogadishu’ in November 17, 1991. This was perhaps the deadliest period of the civil war in Somalia resulting in the deaths of estimated 25,000 people and displacement of 1.5 million others.
The two sides still fought thereafter and by 1994, Aidid who was being hunted by the US named his new cabinet but was felled by a bullet from a member of his faction and relative in August 1996.
Mahdi resigned in January 1997 but was handed an extended stay in power following the Cairo Agreement in December of the same here.
He was succeeded by Abdiqasim Salad in 2000.
ShareTweetPin
Previous Post

Mogadishu imposes $5 fine for no masks

Mogadishu imposes $5 fine for no masks