in Featured, featured, Hirshabelle, National News, Security
A A

The workshop aimed at equipping the trainees with skills on how to prevent and counter violent extremism and radicalization and strengthen collaboration with security agencies to respond to terrorism in the region. They discussed ways to strengthen trust and collaboration between the communities and law enforcement and the use of Social Media to counter AS seductive messages and propaganda.

In line with the AMISOM mandate, its Protection, Human Rights and Gender Unit, organized the training with the regional PCVE office. The HirShabelle State’s Minister of Justice, Honorable Khalif Mumin Toxow, who graced the workshop, encouraged participants to apply the skills and knowledge acquired to make their communities safe.

“Extremism is dangerous and made worse when it turns violent. I hope the participants in this workshop will use the knowledge to guide the rest of the community,” said Minister Khalif.

“Violent extremism has made Somalia and the youth lag behind and left widows in its trail. I call on participants to join hands to end violent extremism,” said Col. Farah.

Nasteho Abdi Ali, a member of the Hiraan Women’s Organisation, stated, “I appeal to all women to lead this fight. Those dying are our children, brothers, and husbands. As mothers, we should sensitize our husbands, sons, brothers, and in-laws to address violent extremism.”

Ms Mane Ahmed, the AMISOM Gender Officer, said the training would promote collaboration between law enforcers, the local community, and the media to help counter violent extremist. She added that it is paramount to ensure that youth and women are equipped and participate meaningfully in preventing and countering violent extremism in their communities.

“We expect the participants to continue training on their own. We will return later to monitor and evaluate their progress,” Ms Ahmed remarked at the end of the two-day workshop. 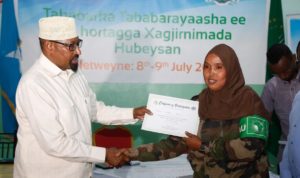 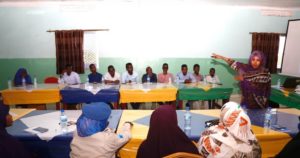