The African Union Mission in Somalia (AMISOM) has lauded Ugandan troops for their contribution to peace and stability in Somalia.

The soldiers, belonging to Uganda People’s Defense Force (UPDF) Battle Group 25, were awarded medals and certificates for their peacekeeping role in the Horn of Africa nation.

Francisco Madeira, the special representative of the Chairperson of the African Union Commission for Somalia and head of AMISOM, commended the battle group for promoting dialogue and reconciliation among communities residing in its area of operation.

The Ugandan contingent operated in Eljale, Bufow, Marka, Shalnabot, Qoryoley and Mashalay among other areas in Somalia’s South West State.

“During the last 12 months, you have managed to implement the program of the AMISOM by going to

your forward operating bases (FBOs) to fight the enemy and bring peace and stability to the residents of Sector One,” Madeira.

“The African Union is in Somalia not for any other purpose other than helping to liberate this country from the scourge of a ruthless and destructive Al-Shabab,” Madeira said in a statement issued on Thursday evening after the medal award ceremony.

Paul Muhanguzi, commander of UPDF Battle Group 25, lauded the AMISOM leadership for their guidance and support, which he said enabled the contingent to achieve its mandate.

“Battle Group 25 supported the Somali National Army in capturing Marka, which is the second-largest city in the region. The 25th battalion has also supported and nurtured the local forces who were later recruited into the ranks of the Somali NISA (National Intelligence and Security Agency) force,” Muhanguzi said. 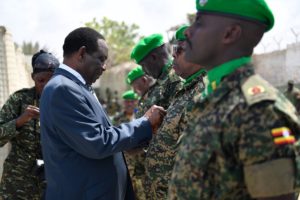 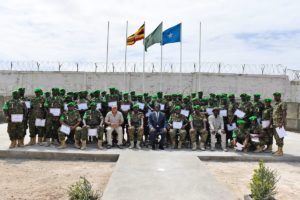