The fact that 99% of Somalis don’t have the right to vote is just one deficiency of the ongoing process.

After various delays, Somalia’s elections are now underway. Four regional states have now completed the election of their Upper House members. The selection of the 275 members of the Lower House is awaited. And if all goes according to the latest schedule, the president will finally be appointed on 30 November.

This stage has not been easy to reach. Since the electoral process was agreed to and signed into law in May 2016, there have been several delays. And it is likely that there could be more before the process is completed.

While trying to remain positive, these postponements have raised concerns amongst both Somalis and the likes of the UN and European Union, which warned the delays “put in question the Somali authorities’ unequivocal commitment to the electoral process”.

But why have the elections faced repeated interruptions and why are many Somalis and observers getting increasingly wary about the process and how it is being run?

The first thing to note about Somalia’s (s) elections is that they’re not one-person-one-vote. That had been the hope for this year, but this ambition has been pushed to 2020. Instead, the voting is being done by just 14,025 people, picked by clan elders and divided up into electoral colleges.

This is a step forward from 2012 in which parliamentarians were chosen by 135 traditional leaders, but a huge distance away from universal suffrage. The vast majority of Somalis are mere observers in the process.

There has been a surge in reports of harassment of political activists and opposition leaders as well as arbitrary detentions of journalists, the arrest of the editor of a Mogadishu newspaper Xog-Ogaal being the latest.

This has raised fears that the election is not being played on an open and fair footing.

After a quarter of a century of conflict, Somalia has yet to rebuild the electoral infrastructure needed to ensure the elections are free and fair.

Moreover, before the country could start the elections, it has had to complete its federalisation process. This has involved establishing new regional states and the last remaining one to be created – Hirshabelle – proved a particularly big obstacle amidst political disputes. The election date had to be pushed back twice before the state was finally established.

The details of how exactly the election process is to work has also become a source of political wrangling. This has allegedly opened the election up to manipulation from within, leading to disputes between rival figures. There are allegations, for instance, that allies of the president have worked to ensure his supporters dominate the electoral colleges that will choose parliamentarians.

These internal rows have contributed to delays as well as increased tensions between competing politicians and between the electoral bodies and clan elders.

4) Trust in the election bodies is low

When it was originally appointed, the FIEIT’s members included cabinet ministers, which led to concerns about its impartiality. International partners urged the government to reappoint the body, but the new make-up of the FIEIT still has a former president’s adviser as its chairperson. There are similar concerns regarding the SIEITs, which some have accused of being run by surrogates of politicians running for office.

The National Leadership Forum (NLF), the body that decided the electoral process, ostensibly agreed that 30% of seats in both houses of parliament would be reserved for women. This is hoped to mark a big step forwards for gender equality in a deeply patriarchal society.

However, it is clans and sub-clans that are required to put forward lists of nominees that meet this 30% quota, and many have been reluctant to do so. For instance, FIEIT had to return the lists of Upper House candidates to three of the four regional states that put them forward after they failed to meet the criteria, adding to delays.

The FIEIT seems prepared to ensure the quota is met, but even if the clans do meet the requirement, their recalcitrance in doing so is indicative of the difficulties female politicians are likely to face once in office.

6) Warlords could return by the ballot box

Worryingly, nominations to the Upper House have included some known former warlords. Abdi Awale Qaybdiid was put forward in Galmudug; Mohammed Said Hersi Morgan (known as ‘the butcher of Hargeisa’) was nominated to represent Puntland; and Abdifitah Mohamed Ali was a candidate for Jubbaland.

This led the UN to write to these regional administrations, urging them to reconsider, and stating: “A rejection of parliamentary candidates who have been implicated in some of the country’s worst human rights abuses will reaffirm Somalia’s commitment to end the culture of impunity in the eyes of its own citizens and the world at large.”

However, these concerns have been dismissed, with parliament in Galmudug saying it was too late to raise these issues and calling on the UN to respect the choices of the people. This means some of Somalia’s new decision-makers could include individuals heavily implicated in some of the country’s most notorious human rights abuses. This could have been avoided if there had been stronger eligibility requirements for candidates.

Somalia’s election involves several reforms to the political system and many people have not been sufficiently educated about the new arrangement. For instance, several interviewees who spoke to African Arguments in Galmudug, including clan leaders and members of regional state parliament, lacked a clear understanding of how the electoral process works and of the difference between the Upper and Lower Houses of parliament.

If the election is to be meaningful and the new systems of governance to be effective, its essential that political leaders – not to mention the broader population – understand how they operate.

For a country still emerging from a quarter century of conflict, security is a vital concern. The Islamist militant group Al-Shabaab has launched a number of high-profile attacks in recent months, expressed their determination to disrupt the process, and threatened elders who participate in the election. The group still looms over the process and could unsettle it over the coming weeks.

This will especially be the case given that the AU peacekeeping force AMISOM is overstretched. When Galmudug asked for the deployment of extra forces, for instance, the request was not fulfilled in time for the Upper House election, leaving the regional state to rely on its own under-trained and underfunded forces.

For the reasons above, Somalia’s ongoing electoral process is highly imperfect and precarious. But despite these challenges, the elections do provide some hope for the future. Just the ability to hold elections in all federal states as opposed to just in Mogadishu, as was the case in 2012, is cause of celebration.

But this is just the latest, small step in the right direction. And the opportunity it provides can only truly be seized if lessons are learnt and if the myriad deficiencies of the process are not dismissed as minor defects, but examined, understood and addressed. 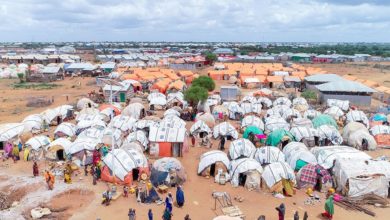