in Education
A A

Around 3 million school-age children are out of school in Somalia. UNICEF is working since 1972 in Somalia to improve the education level.

Around 6400 children join the school as the result of this UNICEF’s effort. A boy named Yahya told UNICEF in his interview;

“I am 14 years old and live in Dohaguba in Somaliland. I wanted to increase my knowledge, become learned and help y people and country”.

The combine efforts of UNICEF and the government is changing the educational demographic of Somalia. However, it is just a start.

A conference on Education was arranged in which, Foroogh Fououzat (Deputy Representative of UNICEF). Highlighted the importance of education in Somalia, she said;

“Education is important in different aspects. It is directly related to building human capital, which Somalia highly needs. But, it also plays a significant role in peace building.”

The quality of education and school facilities are one of the largest reason for school dropout. The majority of students are dropping from school due to higher fees and the distant location of schools.

The highest school survival rate is 71%, with a decrease from the previous year. UNICEF’s targeted communities are providing; adaptable timetable and calendar, temporary learning space, audio instructions, and mobile libraries.

Specific curriculum to provide basic life knowledge is also being provided. Barry Reeves, lead consultant of an education program in Somalia, share his views on the education system in Somalia;

“The program is trying to build the capacity of education to plan and manage the development of their education system”.

Training for teachers is the pillar of the strengthened education system in Somalia. UNESCO representative, Mohamed Djelid, said in his interview,

“How to build this education system? You can budget teacher’s training and change curriculum”.

The importance of teacher’s training is visible from the above statement. UNICEF has organized in-service training for teachers. With the collaboration of local authorities, this program was implemented in thousands of school in remote areas.

Teachers were specifically trained for child-centered and gender-specific topics. UNICEF has planned to continue this 19 days training for three years.

UNICEF initiated a revised curriculum printing for the primary classes. This results in the creation of 24 textbooks and syllabi for grades one to four.

These textbooks were for; Arabic, Somali language, mathematics, science, social studies, and Islamic studies. The curriculum developed was flexible to be used in Koranic and primary schools.

The curriculum was specifically designed and compacted for the backed Somali generation. Jeffrey Bakken, Mission Director of USAID, narrate in his interview;

“Education is being delivered in an accelerated format condensing grade 1 to 8 in five years”.

Due to the religious differences and diverse mindsets, around 40 Somali educationalists were included in the revision team to align the course according to the local mentality.

It took them two years to revise the curriculum, and the final curriculum includes the pictures of girls and boys, which was a notable achievement. In support of international organizations, UNICEF assures the availability of printed curriculum in almost 80% of schools.

The country’s gross enrolment ratio is almost 22%, which is the lowest in the world. UNICEF launched many peace initiatives and programs to promote peace and unity in the country.

Though, the majority of these efforts go in vain. Educationalist admits that the solution to this war and poverty is education.

“To give enough education to our people is the way we can create united communities”.

Lack of educational data was one of the issues in the Somali education system. UNICEF launched a survey throughout the country with local authorities to collect relevant statistics of schools, teachers, staff, and students.

Ali Abdullah, a headmaster of a school, describes elements in the survey;

“I have been asking ages to find the ratio of ages, asking how many orphan and how many have disability is”. 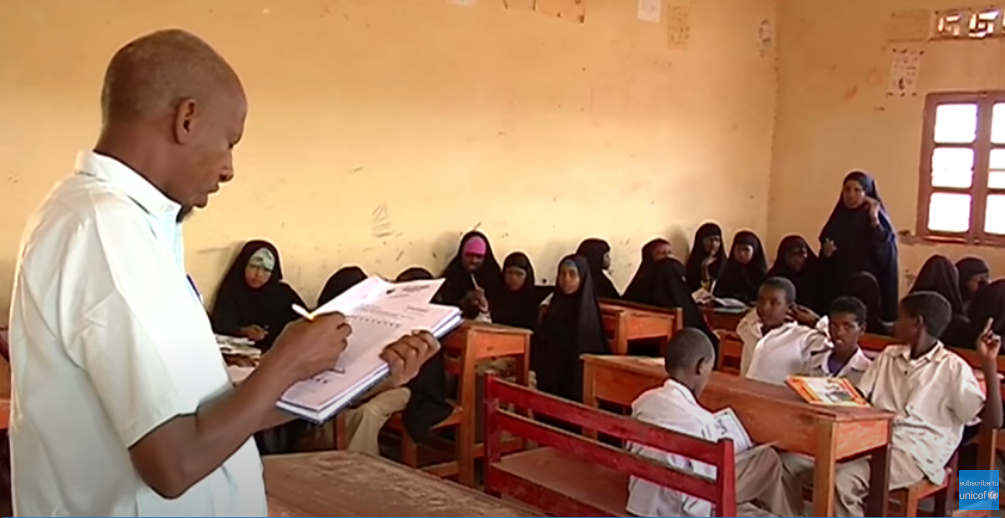 It is visible from the untiring efforts of UNICEF that Somalia is willing to have a bright future. UNICEF, in collaboration with international firms, is working adequately. However, it is a long journey to achieve the ultimate goal.

Melissa Calvert is currently working as an Academic Writer at Assignment Assistance and Master Thesis. Her dedication to education is visible from her blogs. She had also served as a volunteer in different education programs for underprivileged children. She often blogs at Student Essay.

Somalia rolls out vaccines for COVID-19

Chevening Scholarships for 2021/22 round open

Over 30,000 candidates sit for form four exams in Somalia

Somalia rolls out vaccines for COVID-19