in Banaadir, Education, Featured, featured, National News
A A

Secondary students take their national examinations in Mogadishu, Somalia, on 22 May 2018. Over 27,000 secondary school students in Somalia took part in the exams. AMISOM Photo / Omar Abdisalan

Form four final exams will start next month in various parts of the country, the Ministry of Education has said in a newly released timetable.

The Deputy Minister of Education Feysal Omar Guled, told the media that the 2018/2019 form four final exams will kick off on Saturday the 11th May 2019 and will run for five days.

The number of students sitting for the exams was however not made public.

A total of 27,600 students from Galmudug, HirShabelle, South West, Jubbaland and Banadir regional administration sat for the exams last year. Education Minister Godah Barre said this past week Puntland authorities had not accepted to participate in the joint exams administered by the Federal Government since 2015. 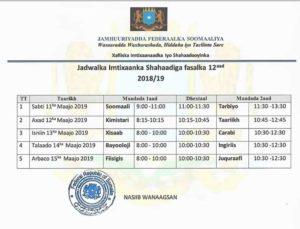