The televised meeting of the Council of the Ministers (the Cabinet) chaired by President Mohamed Abdullahi Farmajo on October 18 represented a unique event of government transparency while it has also damaged the under stress Somali embryonic democratic system of governance.

The troubling leadership of President Farmajo for revering and reenacting the undemocratic practices of the authoritarian model of governance that ended with bloody popular uprising 27 years ago is incompatible with the peacebuilding and statebuilding goals and with his long personal experience with democratic culture. In addition, undemocratic practices are unlawful under the articles[1] 1 (1), 3 (4), 87(1 (a)), and 100 (a) of the Provisional Constitution adopted in August 2012. As the President cannot chair the federal parliament or Supreme Court, he cannot chair the Cabinet.

However, the significance of the meeting was simply a response to a long overdue recommended training session for the President, Prime Minister (PM), Ministers, and members of the federal parliament on the goals, principles, and activities of the New Deal agreements that guide the engagement and cooperation between the International Donors and the Federal Government. Indeed, Somalia, as one of g+7 fragile countries, is under the “New Deal Arrangement” internationally supported through Compacts and Partnership Agreements signed in Brussels and London in 2013 and 2017 respectively as the right path for Somalia’ exit out of the conflict and fragility situation.

For so long, Somali leaders have shown big misunderstanding of the tasks and intricacies of the New Deal process which, among other things, promotes institution building, political election, and good governance for the period 2017-2021.

The major accomplishment of the staff and advisors from the PM’s Office was to translate the peacebuilding and statebuilding goals (PSG) of the New Deal – the inclusive politics, security, justice, economic foundations, and revenues and services[2] – into Somali language for ownership and implementation. The claim that the presentation was Somali formulated plan was incorrect given the immense contribution of the international donors. Honesty and humility should reign the public service.

The 5 PSGs branched into 285 priorities further sub-divided into 1986 activities to be implemented by the whole institutions of the federal and state governments before 2020.  Therefore, the understanding of the New Deal is necessary precondition for the success of the international engagement in Somalia.

In April 2017, the Overseas Development Institute (ODI) in London, UK, conducted an independent review of the implementation of the Somali Compact 2014-2016[3] and found that one of the challenges that hindered the implementation was lack of sufficient understanding of the important tasks in the New Deal by the members of the cabinet, parliament, and majority of the Somali population because all information were in English.

The presenters summarized the activities dispersed in the London Partnership Agreement[4], Security Pact[5] and Security Transition Plan, IMF Staff Monitoring Program (SMP)[6], USAID Strategic Framework for Somalia (2016-2019)[7], UN Strategic Framework for Somalia[8], World Bank Somalia Country Partnership Framework 2019-2022[9], and Humanitarian Response Plan[10]. They did not provide verifiable facts and figures on the accomplishments on the 1986 activities except the payment of salaries, Mogadishu Stadium vacated by AMISOM, and few other activities. They ignored the role of civil society and the private sector.

President Farmajo demanded more information about the level of implementation of the 286 partnership priorities. In response, PM Hassan Kheire promised to get a computer that will facilitate him to follow the implementation progress of each activities from his office.

The hope is that the President, PM, and Ministers have benefitted from the training for accomplishing their responsibilities efficiently and effectively before 2020/2021. The Ministers gave the impression of not being forewarned about the training session but they followed the presentations attentively.

The Ministers of finance, defense, constitution, and internal security were either absent or silent. The intervention of the Deputy Prime Minister Mahdi on “Is Xilqaan (self-help)” program got off-guard the PM who gave him one minute. Minister Khadija of Sports and Youth delivered the strongest back-patting and idolization speech to forcefully underscore her influential role as the sixth member of the decision-making team.

Minister Awad of Foreign Affairs attempted to remind his leaders and colleagues to recognize and appreciate the accomplishments of the previous governments from 2000 but the PM quickly interrupted his intervention. Minister Salah of labor advocated for youth employment and civil servant training but he did not mention the end result of the 1,000 youth employment program announced by the PM. Minister Mareye of Commerce raised the long awaited resumption of the stalled dialogue between the federal government and Somaliland but the PM responded dismissively.

Minister Hassan of Justice pleaded for the urgent establishment of the Independent Judiciary Service Commission. Minister Jamal of National Planning called the President and Cabinet to not forget the role of the National Development Plan completely crowded out by the New Deal agreements. The monitoring and evaluation function of the planning ministry has been taken away.

Three remarks of the President deserve attention. First, he ordered the immediate presentation of the electoral law to the Council of Ministers before settling the federalization structure and completing the constitution. Second, he complained about the foot dragging of the donors and called the public for self-reliance. That signals looming crisis and lack of progress. Third, he revealed that behind the scene there are powerbrokers who settle any disagreement between him and the Prime Minister. That kind of arrangement allows private individuals outside power structures to undermine political negotiations between power centers or political forces and stifle political course-correction.

The author can be reached through: mohamuduluso@gmail.com 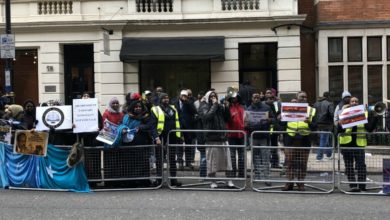 Somalia’s first licensing round could be a tough sell