The British oil explorer which was in 2015 under the spotlight by a UN report over its dealings with Somalia inflated the cost of its seismic survey in 2013 likely denying Somalia earnings from part of oil proceeds should the UK explorer be granted oil blocks, a senior government official has said.

Petroleum Permanent Secretary Jamal Mursal, in an advisory to Petroleum Minister Abdirashid Ahmed, said the amount (43 million) which Soma Oil and Gas Exploration Limited said it spent in the 2-seismic survey on offshore Somalia for oil and gas was close to two times standard industry costs.

“Soma Oil and Gas is dodgy in its claim of investing in Somalia USD 43 million. That number is inflated nearly twice,” said Mursal. “Carrying out a 28,000 km-line of 2-D seismic survey in offshore will cost somewhere in the range of USD 18-21 million inclusive of regional evaluation.”

In August 6, 2014, Soma Oil negotiated a Second Amendment Agreement with the Ministry of Petroleum for territorial allowance as well as a draft agreement that would grant it a larger share of profits from potential production. Subsequently, Soma was awarded right to exploit 12 offshore oil and gas blocks amounting to 60,000 km2.

“The Ministry hereby requests that Soma include within its exploration Program (as defined in the SOA) a 2D seismic survey that extends to the JORA (Somalia-Kenya border) blocks as outlined in the attached map. Also JORA blocks will become part of the area in respect of which Soma may serve a Notice of Application for a Production Sharing Agreement pursuant to Article 2.2 of the SOA,” the Petroleum Ministry said in a letter dated May 2, 2014 to Soma Oil.

In its 2015 report, the UN Monitoring Group for Somalia and Eritrea said the new agreement was a quid pro quo arrangement between the Federal Government and Soma Oil. The UK Serious Fraud Office later dropped charges against Soma Oil noting there was, ‘insufficient evidence of criminality in relation to capacity building payment for there to be any realistic prospect of conviction’.

In his advisory dated 18/11/2018, Mursal said should Soma Oil be granted the 12 blocks in return for the $43 million investment, Somali would be disadvantaged since the value of the blocks runs into billions of dollars far more than Soma’s investment. “Among the 12 blocks picked by Soma, 2 blocks are believed to contain an estimated 8-10 billion barrels of oil. Today’s oil price is USD 65/barrel and obviously, the arithmetic shows we are talking about huge amounts for Soma Oil and Gas,” said Mursal. Only two blocks instead of 12 are sufficient for the British oil company, the PS said.

Even though Soma Oil Gas has not been awarded the blocks, the government official says, the fact that it has submitted Notices of Application ‘is good enough in stopping other companies from applying for the same blocks.

Mursal also advised the minister against the expected bid rounds in February noting Somalia does not have the requisite human resource capacity and legal framework to license oil drilling. He added Parliament must consent to the opening of the bids and that only 10 blocks should be opened in one bid round. According to the Petroleum Ministry, there are 206 blocks and the government is expecting to open 50 of them in the London round which Mursal termed as unprofessional.

Heavy Down Pours In Gedo 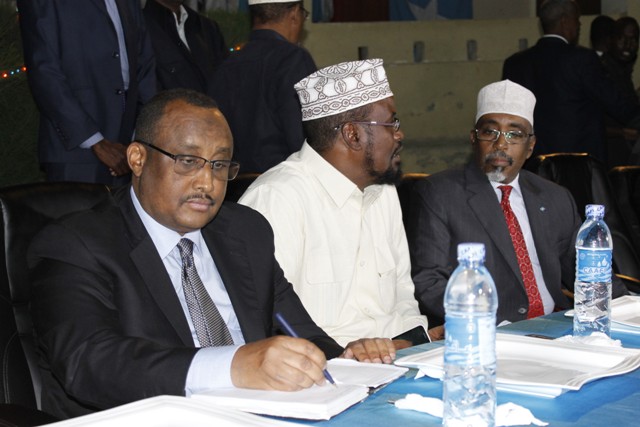