in Banaadir, Featured, featured, National News, Sports
A A

FILE: Mohamed Ahmed Hassan aka Mandeela at a training stadium in the capital Mogadishu

Mohamed Ahmed Hassan aka Mandeela had lived in Britain for more than 30 years, and was a football trainer in a school that taught the football and body buildings, but now he is back to Mogadishu so that he might help the Somali youth who admire the skills of football who currently play in the dangerous streets of the capital Mogadishu.

Mohamed Abdulle, a former Somali football player in the 1970’s and was a member of the Petrol team, went the pitch where Mandeele was training the boys.

Mr Abdulle told Goobjoog News that people acquired skills in abroad like Mandeele should come back to their country and support the Somali youth who choose the football though they have had difficulties in life.

Mandeele, the football trainer, believes that if he continues to train the young players in the near future and would take part in the success of Somali national team.

The young players who were at the training centre of Mandeele told Goobjoog news that they are calling people with football experience in abroad to come back and training to the young Somali boys who are in desperate to obtain football skills.

Abdullahi Ga’al Ahmed, who is also a diaspora from Britain has also noted how the beautiful skills of Mandeele are important in promoting the football field of Somalia.

“I have known him for a long time as an ex-football player and now he promised with his skills to produce young talented Somali players who will have a good future in the sports in general and particularly to Somalia,” said Abdullahi

While Somalia rebuilds itself after decades of conflict, its national football team battles to qualify for the 2018 World Cup in Russia. No other team dares to visit the Somali capital Mogadishu since it still frequently gets attacked by Al-Shabaab. The national side is forced to play its ‘home’ matches in neighbouring Ethiopia and Eritrea. 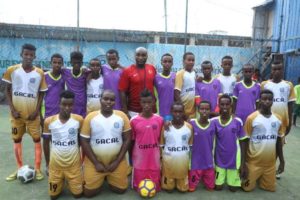 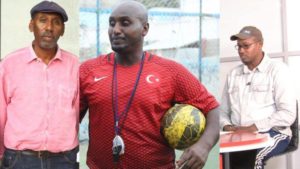 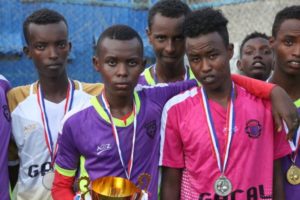