On 27 June 2019, the Somalia government has considered a tweet that affronts to Somalia’s sovereignty, unity and territorial integrity as well as harmful to the relationship between Somalia and Kenya. 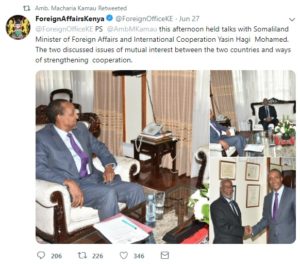 This comes after the Foreign Affairs of Kenya official tweet has tweeted that the principal secretary of the Ministry of foreign affairs of Kenya, Macharia Kamau has held talks with Somaliland Minister of Foreign Affairs and International Cooperation Yasin Hagi Mohamed, as they have discussed issues of mutual interest between the two countries and ways of strengthening cooperation.

Over the past years, Somalia and Kenya have been arguing a maritime row that’s due to go to the international court of justice in September.

Kenya has started to have a close relation with Somaliland as it has opened a diplomatic mission in Hargeisa Somaliland’s capital to pressure the federal government of Somalia to discuss the maritime row out of court.

Somaliland has been a self-declared country since 1991, but still not recognized in the world.

“Somalia stands for good-neighbourliness, mutual respect and close cooperation with its neighbours, and expects the same from Kenya,” reads the statement.