in Featured, featured, international News
A A

The two leaders discussed the bilateral relations existing between the two regions as well as trade cooperation, according to Somaliland Foreign Minister Dr Isse Kayd.

The Somaliland Foreign Minister further said that the meeting revolved around the use of the Berbera Port, which is expected to be a major trade gateway for landlocked Ethiopia as the Horn of Africa Nation depends on Djibouti for 95% of its imports and exports.

Today morning, President Muse Bihi, together with the Ethiopian Finance Minister and Foreign Affairs Cabinet Minister, landed in Hawassa city, Ethiopia to begin the second leg of his official tour.

Yesterday’s visit by Bihi marks the second visit made by the Somaliland Head of State to Ethiopia, since Abiy Ahmed ascended to power in 2018. 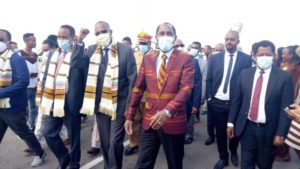