The US Government has intervened on the mess of Kenya and Somalia border row on which the two countries have been escalating for over some time now.

Kenya has remained firm to an extent of vowing not to allow the loss of even an inch to Somalia.

However, the US Government through Ambassador Kyle McCarter has stated that the US is ready to facilitate the understanding between two nations.

Speaking to Citizen TV last night Ambassador Kyle said that the US is ready to facilitate negotiations between Kenyan Leaders and those from Somalia to end the row.

The US Ambassador has insisted on outside court negotiation between the two countries to end the border row.

“The US is working to facilitate a settlement, I believe Kenya and Somalia can live together as good neighbours,” he said.

McCarter has also retorted that both Kenya and Somalia have many things in common which cannot be washed away by a border dispute.

“Kenya and Somalia have one common enemy ‘Alshabaab’ which they need to unite to root them out,” he added

This comes just days after The Arab Parliament sent a stern warning to Kenya ordering it to stop interfering with matters to do with the sovereign state of Somalia. 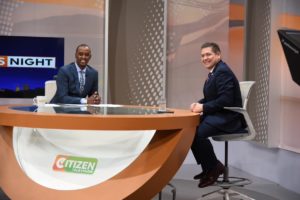